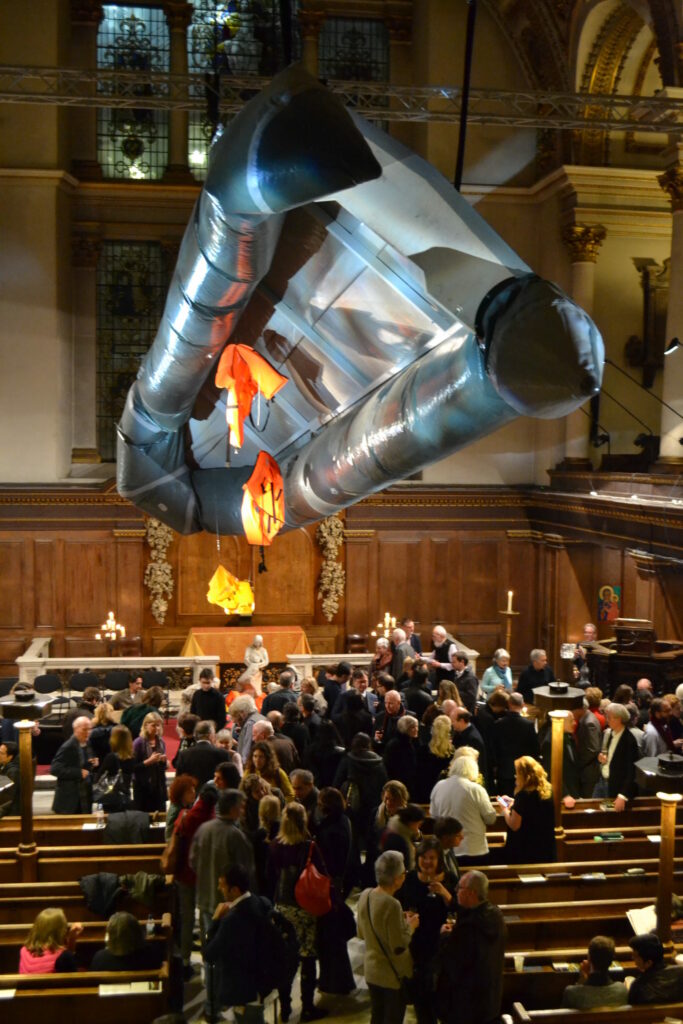 Arabella Dorman is a British war artist and portrait painter who has worked with refugees in Lesbos, Calais and Dunkirk. In December 2015 she created an art installation at St James’s by suspending a dinghy, which had been used to transport refugees across the Mediterranean, from our roof. Called ‘Flight’, the exhibit was on display until February 2016. 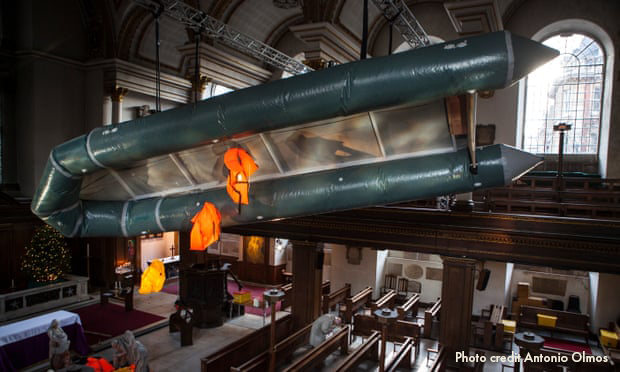 Watch this video by filmaker Carolyn Davis, with interviews with Arabella, our rector Lucy and members of our community, and read Arabella’s own statement about her work, below.

Arabella wrote this statement about her work:

Flight is my first in a series of works that seek to address the current humanitarian crisis of forced displacement across the world, as thousands of migrants fleeing war and persecution continue to arrive on the shores of Europe today.

I travelled to Lesbos as a war artist in 2015, having spent the past decade exploring the human face of conflict and it’s consequences in Iraq and Afghanistan. Nowhere however, have I been so overwhelmed by the tragedy of war than by the human drama unfolding on the beaches of Lesbos. What I saw was timeless, biblical, it was humanity laid bare. Flight is my response.

In hanging the installation above the nave of St James’s, I have picked up on the tradition of hanging boats from church ceilings, linking the Latin word NAVIS (‘ship’) to ‘nave’, which symbolises the Church as the collective boat in which we find refuge.

Installed over the Christmas period, the three lifejackets evoke the flight of the Holy Family to Egypt and ask the viewer to engage with the subject on both a metaphysical and physical level. The setting of the boat invites the viewer to embark upon their own spiritual journey, while a suspended interplay of light, form and shadows above the nave reflects the uncertain, rootless and volatile experience of life as a refugee.

My interest lies in the men, women and children behind the headlines, the individual stories behind the politics. I attempt to illuminate and to reveal the human face of conflict, and to find light in the darkest corners of existence

Flight is as much about light as it is about the darkness from which it emerges. It is about exile and desperation, but it is also about courage, faith and hope. It asks us to consider the hope that a life can be rebuilt in another land, and to seek the light within ourselves that will validate that hope, the light that will not allow us to turn our backs in prejudice and fear on the plight of thousands.

I know that art cannot change the world, but I hope that those who stood in the nave of St James’s felt something of the cry of anguish that I felt standing on the coast of Lesbos. Flight is that cry. It is a plea that such suffering cannot go on. It is a call to resistance against the horrors of war and the greed of the traffickers. It is an act of empathy and solidarity as we reach out to our fellow humans. And it is a tribute to those hopeful, terrified souls who now lie in watery graves at the bottom of the Mediterranean.

At a time when the darkness seems to grow closer, with a deepening of complexities, apprehensions and divisions between East & West, my work is about the urgent need for empathy, understanding & respect for our fellow human beings in plight.

In 2017, Arabella followed up Flight with a new art installation called Suspended.

Suspended (2017)
Weekly Newsletter
We use cookies on our website to give you the most relevant experience by remembering your preferences and repeat visits. By clicking “Accept All”, you consent to the use of ALL the cookies. However, you may visit "Cookie Settings" to provide a controlled consent.
Cookie SettingsAccept All
Manage consent