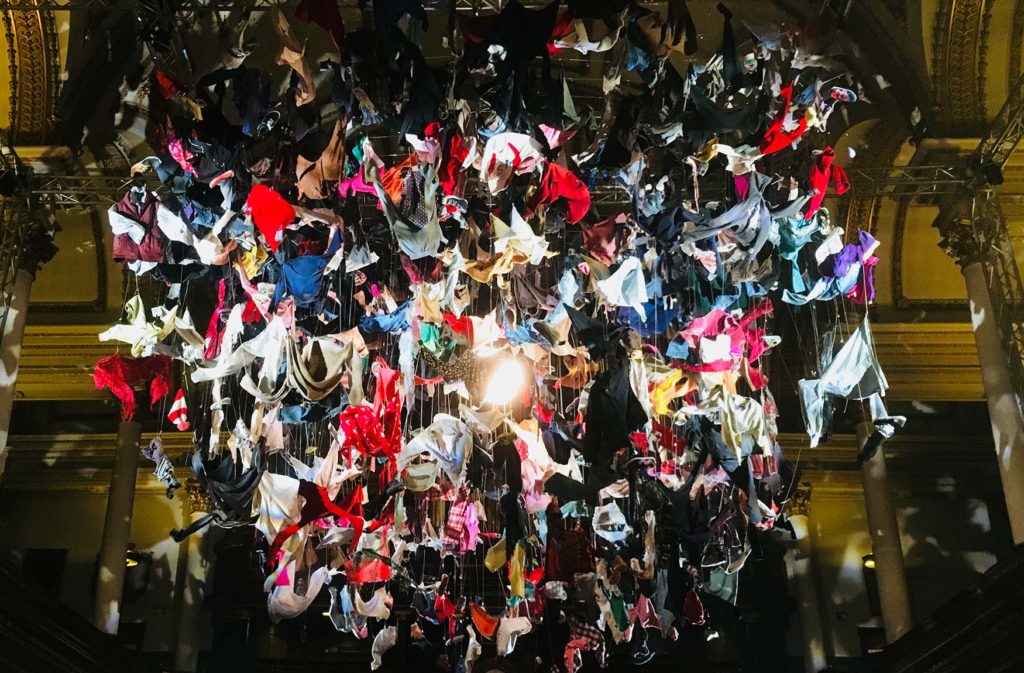 Watch this video by filmaker Carolyn Davis, with interviews with Arabella, our rector Lucy and members of our community, and read more about the art work, below.

In the two years since Flight, thousands more refugees have continued to flee war, persecution and famine for the hoped-for safety of European shores, deepening what has become the worst humanitarian crisis since World War Two. Suspended seeks to highlight the plight of these refugees, with particular emphasis on those who are now stranded in cities and detention centres across Europe – men, women and children hung between loss and hope, suspended between a past to which they cannot return, and a future to which they cannot move forward.

Composed of hundreds of items of clothing that have been discarded by refugees upon their arrival on the island of Lesbos, a stilled explosion has been created over the nave at St James’s Church inviting the viewer to contemplate the violent fragmentation experienced by the inhabitants of these garments.

Lit from the centre, the clothes are seen clearly then lost in the shadow as the light slowly changes in density. While the installation brightens, it represents the light of hope by which a refugee is carried forwards; as it dims, it seeks to remind us that we leave these individuals unseen and in darkness should we choose to ignore their plight and turn away from this most urgent and yet complicated issue of our time.

Today one in every 113 people in the world is forcibly displaced. Whilst Europe struggles to come to terms with this, human trafficking networks are becoming brutally efficient at exploiting and making profit from the vulnerability of migrants – especially the almost 100,000 unaccompanied minors.

All the clothes used in this installation have been collected from the beaches and roadsides of Lesvos, by volunteers working with The Starfish Foundation, a grassroots group formed in response to the growing need for coordinated refugee support in Lesvos.

Suspended raised funds to support the ongoing but often forgotten work that Starfish carries out in the face of what Pope Francis has called the “globalisation of indifference”.

Started in early 2015 by Lesvos resident Melinda McCrostie from her tavern in Molivos harbour, Starfish Foundation has expanded from a one-person operation handing out tea to arriving refugees, to what is now a major operation giving help to hundreds of thousands of people over the last few years. At least 60% of the 210,000 people who landed on Lesvos in October 2015 passed through Starfish’s care.

Starfish has fulfilled many roles supporting refugees arriving on Lesvos over the years, as physical and legal situations have changed. They have helped boats land on the beaches; built and run a transit camp; helped run Moira, the official camp on the island, and collected major donations in both money and stock.

Why is this installation in a church?

The Revd Lucy Winkett: Empty clothes are evocative of the people who wore them. After the Rwandan genocide, the empty clothes of people who were killed as they sought sanctuary in churches were hung in those same churches. At Yad Vashem in Jerusalem and at Auschwitz, empty shoes are piled as a way of expressing the terrible waste of life and as a way of cultivating compassion in those who see them.

One of the church’s roles in situations of injustice is to “create witness”. To encourage one another to become people who are willing to see, not to look away, and then speak about hidden suffering, by making visible what is not visible to most. At Christmas, we tell stories of Jesus becoming a refugee. At the festival of the incarnation, we sing about Jesus being clothed humanity, “veiled in flesh”. This is a way of seeing Christ in all people who are rootless and far from home. And being willing ourselves to become “clothed in compassion”.